OUR NEW FUR BABY. THIS IS HOW WE ADOPTED OUR DOG.

After three months in Miami, we have enriched our family – consisting of my husband, myself and our two little tigers – with a tiny doggo. Joy Mandela (yes she has two names … I will explain later) has taken our hearts by storm. I am going to explain where we found her and how you adopt a dog over here, in this article.

„WE JUST HAVE A LOOK“

My husband and I always wanted to have a dog. Unfortunately, this was not possible in Berlin due to lack of time and space. Here in Miami, however, our living and housing situation has changed, so now it is possible for us to have a dog.

We were looking around for a dog several times in two different shelters in Miami-Dade and found, that it was always quite busy and people apparently like to adopt animals here. Back in Berlin, we were also occasionally in a shelter to have a look, but it was never as busy as here. At the beginning of October 2016, we finally found our little Joy in Miami-Dade animal shelter. She was one of the most pathetic looking dogs I have ever seen. She had mumbled herself into a blanket, her big „bat ears“ were the only part you could see of her. An employee brought Joy (who was named Roxy at the time) out of her cage and into one of those, I would call it a “get-to-know room”. Joy was about eight months young and was extremely intimidated. I squatted down and she immediately hid behind me and sought protection. Thats when the feeling hit us: “We’ll take her.”

The adoption process went by smoothly. Joy was taken by the employee to the in-house vet, where she got chipped and vaccinated. This is mandatory. Afterwards we had to fill out some forms and make an appointment for Joy’s sterilization. The surgery takes place in the shelter and you will not be charched. If you do not have your adopted animal sterilized or castrated, you have to pay a $ 500 fine here. Because shelters are hopelessly overcrowded and overwhelmed, they want to prevent that animals reproduce uncontrolled, at all costs. More about animal shelters and commercial dog breeding in America can be found here.

Until today we do not know exactly why we did not have to pay anything for Joy. Actually you have to pay a kind of donation to the shelter, if you adopt a pet. We assume that the employees were just glad that we took a dog, which requires a lifetime of medication and Joy’s behavior requires a lot of attention, too. Oh well, our little “bargain”. 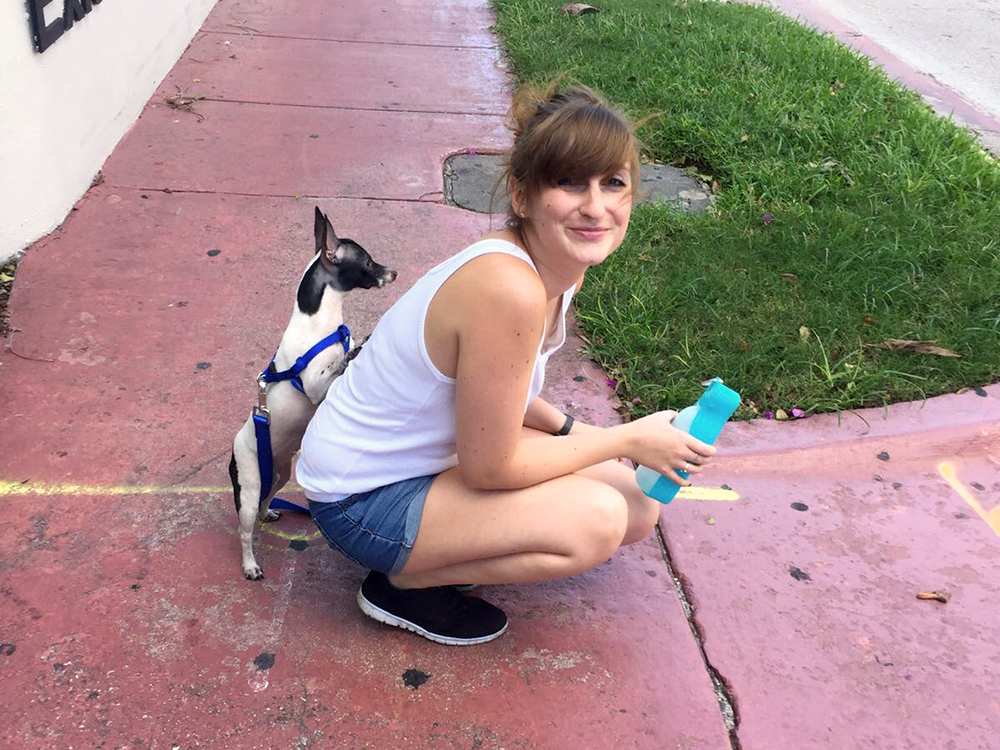 Our very first walk. Joy had no idea what we wanted her to do. 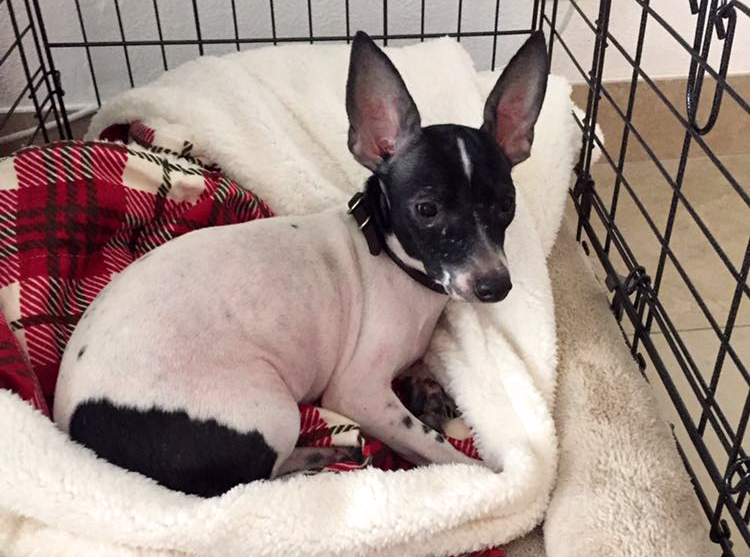 How is it even possible to look so pathetic and cute at the same time?

According to the shelter, Joy was confiscated because the owner passed away. She came to the shelter together with about seven other dogs who looked very much like her. The first eight months of her life must have been hell. She was completely dirty, her claws were never cut and her eyes were never treated, as well. Joy suffers from KCS (Keratoconjunctivitis Sicca), which simply means, that she can not produce tears. Fortunately, we found a great doctor who is an animal eyes expert. In the first six weeks, Joy got three different eye drops and ointments three times a day. She was so brave and endured everything. We were actually able to stimulate the production of tears with this treatment, but she still needs the eye drops twice a day for the rest of her life. Meanwhile, this is part of our everyday life and is no problem at all.

But what took some patience and time was Joy’s behavior. She knew absolutely nothing. We suspect that she had never been outside or had contact with other people before. She had no idea what a meadow is, let alone what you do on a meadow as a dog. She was not housebroken. The little cutie was even so scared at first that she peed herself, when someone slightly bent over her. We really had to teach her everything. But the more we won her trust, the more playful and lively she became. I will never forget her first tail wagging. She played with her toy and suddenly her tail began to wag. She had turned to her butt in utter surprise and looked at her wagging tail, as if it had a life of its own. There were a few such enlightening moments, which of course made us very happy.

Now, after nearly two years, Joy is still a shy dog ​​when it comes to strangers, but all in all she is happy little dog. Last week she successfully completed a twelve week dog training program. Now she is lying next to me and is dozing. That’s how it should be. 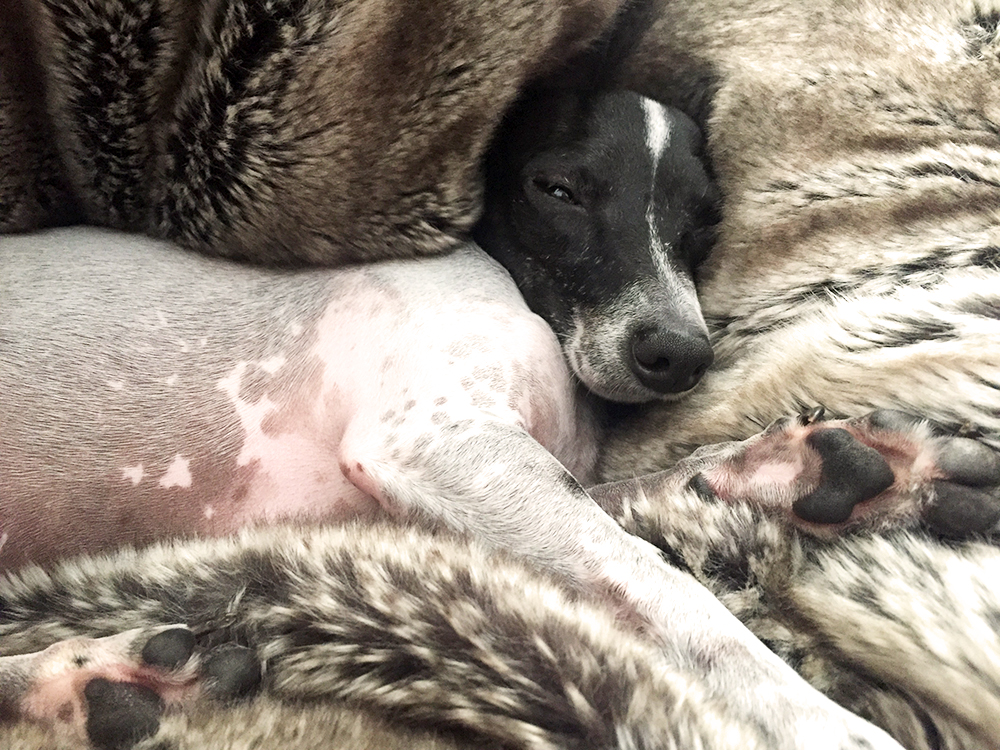 Joy is the biggest couch potato in the world. She learned from our cats. 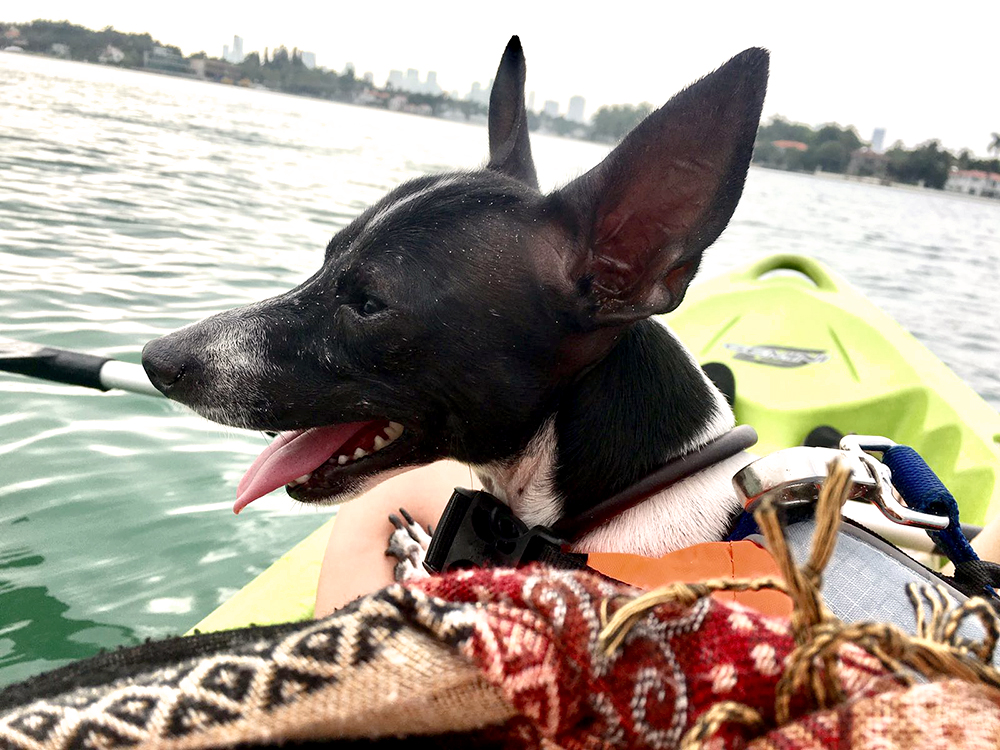 We thought, that since Joy is American, she should have two names. This is common amongst humans, why not for animals? 😉 Our tiny doggo brings us a lot of joy. That’s why we named her Joy obviously. We chose Mandela as a second name, because Joy and Nelson Mandela have something in common. After Nelson Mandela smashed rocks on Robben Island for two decades, his tear ducts have run dry. He could not produce tears just like our Joy. After his release, however, he undergone a surgery that was able to fix this problem. This is not possible with Joy, because KCS is an autoimmune disease. Furthermore, my husband mostly grew up in South Africa, so Mandela also has a personal meaning.